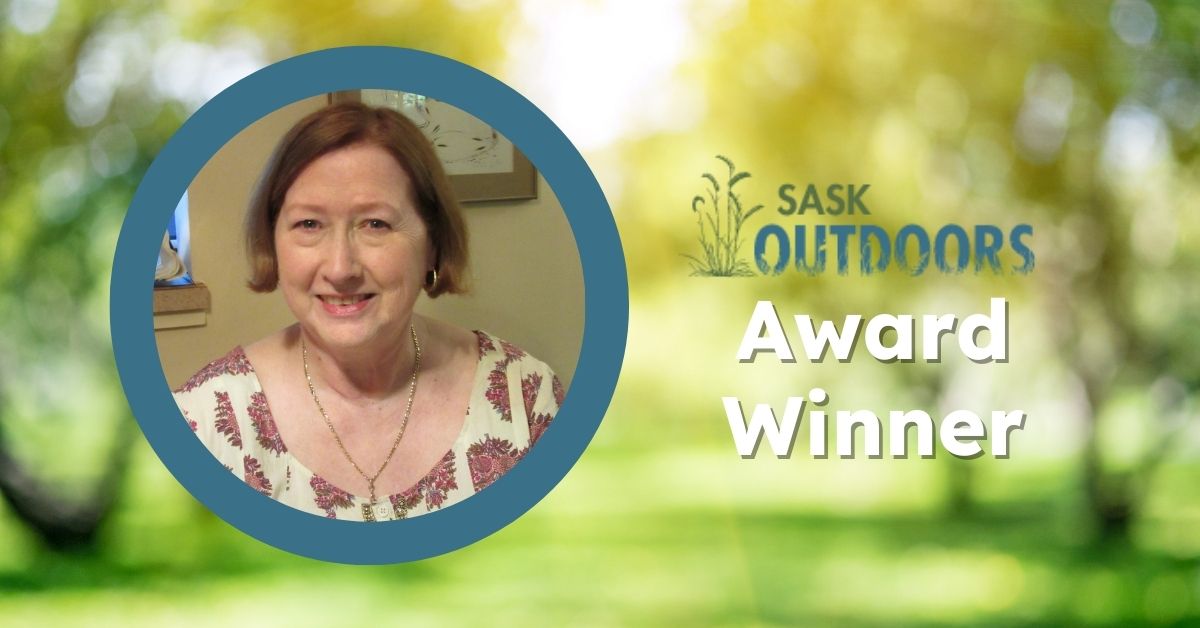 "Lizabeth just never gives up. Her heart for environmental education programs is large. It never shrinks. She is one of a kind!"
(from Melanson Award citation, 2014)

Lizabeth Nicholls (Melanson Award Winner, 2014)
Lizabeth has led a varied career life beginning in Ontario. She had wonderful experiences in small communities and First Nations schools in positions ranging from Kindergarten Teacher to Principal. During this time she worked with the Department of Indian Affairs and Northern Development and the London Board of Education (Ontario). She also worked in Adult Education, Native Curriculum Development, worked as a Co-operative Learning Consultant and more.

Lizabeth moved to Regina with her husband Bill in 1980. She was the Environmental Education Specialist with the Saskatchewan Ministry of Environment. Lizabeth spent countless hours preparing for and delivering workshops in Project WILD, and later in other programs.  Lizabeth was the person behind bringing Project WET to Canada and training facilitators in this program as well.

Another project that Lizabeth led was the development of Climate Change Saskatchewan. A team was created and activities were written.  It provided learning opportunities for a wide range of people about the environment and climate change.
Work changes happened for Lizabeth when she moved in to a position with the Saskatchewan Watershed Authority. Here she continued to coordinate and promote Project WILD, Project WET and Below Zero. No matter where she worked she encouraged educators to consider taking the programs into their classroom and encouraged the most enthusiastic people to become facilitators.

Lizabeth also extended the invitation to learn about WILD, Wet and Below Zero to the First Nations University and other education programs including first nations students such as SUNTEP and NORTEP.

Fabulous Earth Day Conferences for facilitators were thanks to Lizabeth’s organization and determination to make it happen and make it worthwhile.

Then there were the ASSIST summer workshops for teachers, and SPLASH festivals through Project WET.

In 2010, Lizabeth became the Program Coordinator for SOEEA and worked at introducing programs to as many people as possible. WILD was coordinated by the CWF now, and SOEEA was responsible for WET, Growing up WILD and Flying WILD.
Her work has now moved into Manitoba, Alberta, British Columbia, Ontario and beyond as National Coordinator for Project WET Canada. She coordinates, promotes and educates more and more people – classroom teachers and other educators.

Lizabeth just never gives up. Her heart for all of these environmental education programs is large. It never shrinks. She is one of a kind!  She has gone with the flow as changes were made in different departments where she worked and as names changed and as other leaders changed, and programs moved from one authority to another, and Lizabeth remained constant, always moving on and giving of her time, energy and immense talents.

The list is long when you talk about the wealth of opportunities created for educators that came through the direction and leadership of Lizabeth Nicholls. Many educators have experienced Lizabeth’s kind and gentle ways and have benefited from those experiences. Much has been taken into the classroom and shared with children. Kids have been taken outside and taught so many wonderful things about the natural world around them, thanks to Lizabeth.
Source:
Lizabeth Nicholls Melanson Award Citation, SOEEA, 2014.