« Back to Lending Library 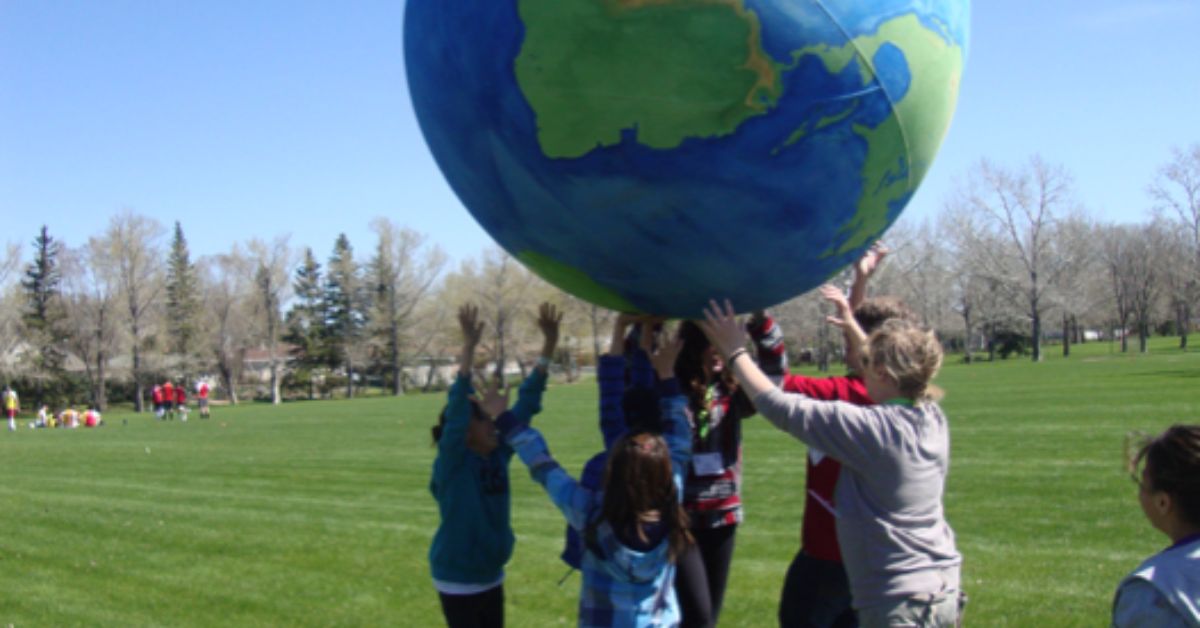 Pick up in Regina only
Specific Borrowing Instructions

Do not use in high winds
Make sure it is completely dry before packing up.
Follow safety instructions below.
Ensure adequate adult supervision.

Complete the lending request form to borrow this item.
View the terms of our lendind library agreement.
Earth Ball Games
** The main issue is SAFETY.  A smaller person getting knocked over by (or falling from the top of) and Earth Bal can get seriously injured. (broken arm, collarbone, neck …)  Ditto if they fall and are trampled or stomped by those chasing after the Earth Ball. For a small group at our picnic last year, we could let the 4-5 kids go wild with the ball. We won’t be able to do that with the larger group we anticipate at the picnic. Enlist parents / other adults to help supervise kids.  When a small child is on the other side of the ball you will not be able to see them, so you will need help.
Generally, be the “teacher” and keep the games organized and controlled.
1.  Start with the Circle game.  Maker a big circle with lots of space between players (but not so much that the ball goes right through).  Practice passing the ball around the circle. Try and make sure everyone gets to help roll the ball.
2. Two Circles Game.  A fun variation on this is making an “inner” and an “outer” circle (face each other).  Roll the ball in the space formed by the two circles of people. (A variation is having a “runner” who is “chased” by the rolling Earth Ball. However runner would need to be a strong runner and large person not to be injured if caught.)
3. Line game.  Have everyone line up in 2 lines facing each other. Good space between you and the person next to you.   Pass the ball down the line. (Need a helper to catch the ball at the end and send it back.)
4. Line race game.  Next, when the ball has passed them, have them “race” the ball (outside the line of people) to the other end & try to get back in at the end of the line before the ball does. See how long they can keep the line moving and the ball rolling.
5. Most kids also like just having the ball rolled over them (go figure!).  Have them lie on their back in two lines, feet in the centre. Roll the ball down the line (mostly over feet & legs). You can tell the kids they have to keep still, or you can have them help move the ball along with their arms and keep the ball going and not escape. BE CAREFUL ABOUT KIDS WITH GLASSES!  Again, you can do the above game as a race where, once the ball has rolled over you, you race to the end and lie down again to see how long you can keep the ball rolling.
5b) If you have a smaller group, you can just roll the ball over them.
5c) I have also seen laying with heads the centre instead, arms up, and try & keep the ball up in the air and moving down the line.  (this has more potential for injury though)
5d) Also legs in the centre, feet up in the air, try to move the ball along up in the air with their feet without losing control
6) “Ball Crawl”.  This involves ‘rolling’ one person up to the top of the ball and then holding them up there. Or, if really good, they can try ‘crawling’ along while the ball moves. YOU NEED FOUR SPOTTERS all around the ball to make this safe – child can come sliding off at any angle. If you have a large group, everyone will want a turn and a lot of kids will be standing around waiting. (Safest way off the ball is flat on tummy, slide down feet first.)
NOTE:  Kids love the opportunity to just fool around with the Earth Ball. This is not safe in large group. With a small group and a large space they are happy just to charge in to the ball, lie under it, chase it all around the place.
BUT – with a big group, see safety warnings above.  The ball can easily get “out of control” and go speeding off …  🙂
“Have fun and stay safe”

Borrow Now
« Back to Lending Library