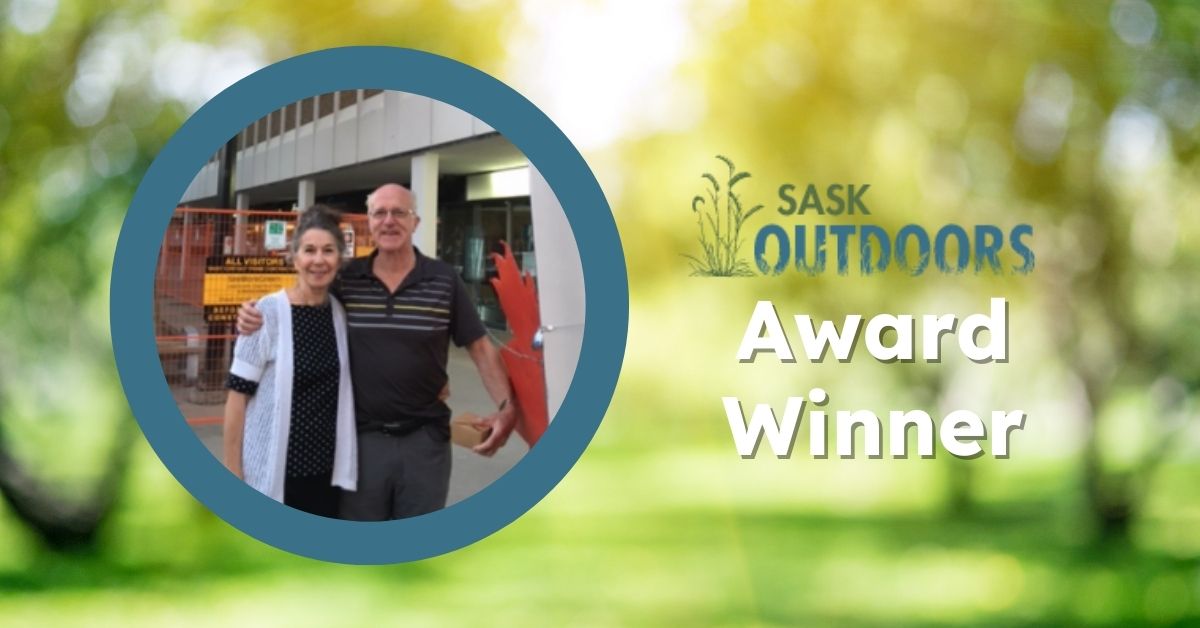 "Together, Geoff and Judith support one another and the environmental causes they believe in."
(from Melanson Award citation, 2005)

Judith and Geoff Benson (Melanson Award Winners, 2005)
In 2005, two long time members of SOEEA who have always worked together as a team, and often as part of a team, were awarded the Melanson award for their contributions to the SOEEA organization, to environmental education, and to environmental activism in Saskatoon and afield. Though their origins were from far away, they have become key members of the Saskatoon and Saskatchewan communities.
Born and raised in Joliet, Illinois, Judith graduated from Michigan State University with a degree in Elementary Education, majoring in Early Childhood Education. Geoff was born and raised in Cumbria, UK and studied at Cambridge before obtaining a PhD in Nuclear Physics at the University of Manchester. They met and were married in Manchester, then immigrated to Canada, arriving in Kingston, ON with their two children in 1974, where Geoff took up a position in the Physics Department at Queens University. Their daughter Shelley teaches Communication at Oakland Community College, and son Aaron practices law, both in Michigan.
While at Queens, Geoff made a career change. He acquired an MBA, and relocated to work for Federated Co-operatives Limited in Saskatoon, SK. In 1980 he joined the Potash Corporation of Saskatchewan, where he worked until his retirement in 2008. Once settled in Saskatoon, Judith earned a diploma in the Education of Exceptional Children, after which she taught Kindergarten to Grade 8 for twenty-five years. Since 1995, she has been writing and publishing books for children and youth. Judith and Geoff became naturalized Canadian citizens in 1979.
During their thirty years in Saskatoon, both were actively involved in the community. They sang in the University of Saskatchewan Chorus, were awarded several conservation awards and were co-founders of SOS – Save Our Elms, an organization dedicated to educating the public on how to protect Saskatoon’s beautiful American Elms from the threat of Dutch Elm Disease.
As members of the SOEEA organization and SOEEA Board members, Geoff and Judith have been invaluable contributors to outdoor and environmental education in Saskatchewan. Early on Judith was editor of the SOEEA newsletter, Envisage, for several years (from 1989 to Summer 991) and has served in numerous other roles on the SOEEA Board of Directors since then including member-at-large, Secretary and Program Director.
Another of the great contributions that Judith made to SOEEA was bringing her husband on board! Goeff Benson joined the SOEEA Executive at a meeting in 1993. Recognizing his superior abilities, he was quickly made Treasurer and Grants Coordinator! Geoff was a steady influence on SOEEA, providing valuable service every year as Treasurer, with his calm and thoughtful contributions at meetings, attending almost every SOEEA event. Many an Ecotour and outdoor event saw Geoff and Judith’s VW van pulled up as their little “home away from home”.
As part of the conference organizing committee in 1997, Judith and Geoff assisted in organizing an excellent SOEEA conference at Brightwater Environmental Camp in Saskatoon. A subsequent conference in 2003 was an innovation for SOEEA and allowed Judith to bring together her two passions for nature and for writing. A joint conference in Lumsden, at St. Michael’s retreat was held in Partnership with “CANSCAIP”, the Canadian Society of Children’s Authors, Illustrators, and Performers, (of which Judith is a member) entitled “Prairie Horizons – Nature Writing”.
Judith has always supported SOEEA’s objectives and led us to greater activism in her letter writing effort and, by association, with her work for SOS (Save our Saskatoon) Elms in Saskatoon, of which organizations she is a Past President.
Committed to the environment through action as well as word, Geoff used to bicycle to work every day, in all seasons and has been doing so for 25 years – to the point where his American colleagues call him “that crazy Canadian”! What an accolade!!
Together, Geoff and Judith support one another and the environmental causes they believe in. They travel together in their VW van, enjoying the bird life and hiking.
After exploring BC by camper, Geoff & Judith Benson were attracted to the Shuswap for their retirement. Living in Salmon Arm, they have found people who shared their interests: birding, hiking, skiing, environmental activities and the arts.
Sources:
Judith and Geoff Benson Melanson Award Citation, SOEEA, 2005.
Geoff & Judith Benson Family Endowment Fund, Shuswap Community Foundation, 2011.