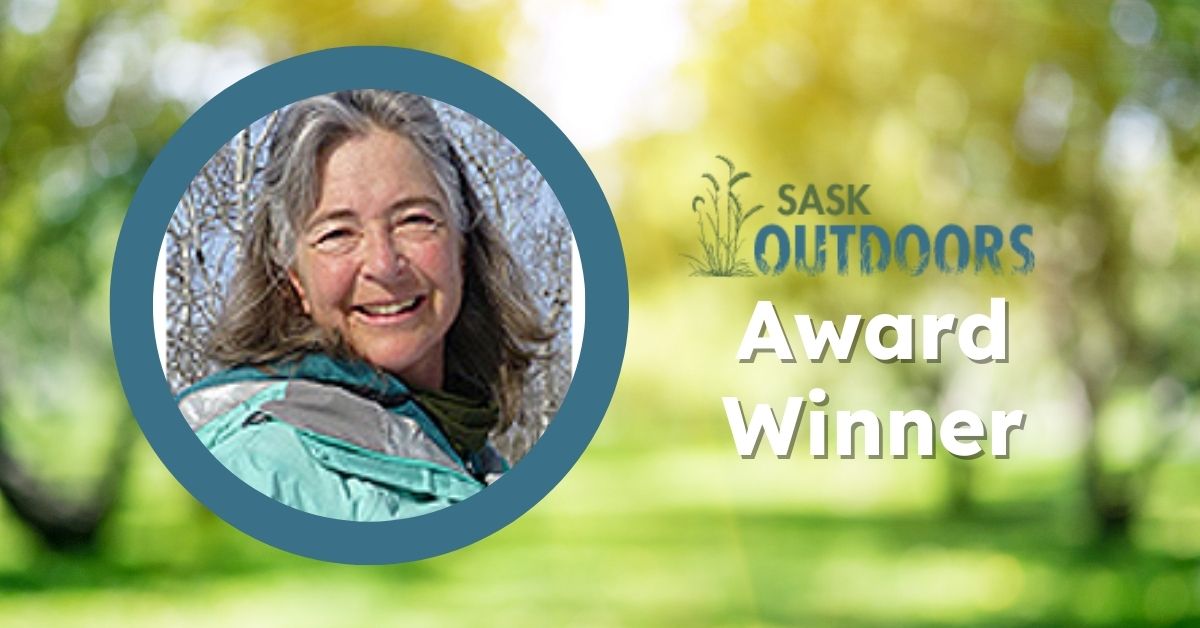 Nomination Letter:
We are proud to nominate our friend and mentor Dr. Janet McVittie for the Bernie Melanson Award. Janet is presently an Assistant Professor in the department of Educational Foundations, College of Education, at the University of Saskatchewan. Janet’s primary research focus has been environmental, place-based and nature education for the past three decades.

Throughout her long and dedicated career as an educator Janet has been a visionary leader and invaluable resource to the Saskatchewan’s environmental education and nature conservation communities. Over the years she unreservedly shared her love and knowledge of place-based education with pre-service, practicing teachers and graduate students as well policy makers, business leaders, cultural leaders and children. Through empathy, patience and invitations to come learn alongside her in the field, Janet has become a friend and ally to a diverse range of community groups and organizations who have gained deep respect for her vision for healthy environmental and social change.

Janet’s research has focused on social and ecological justice education and student engagement. She maintains a strong focus on place-based, anti-racist learning and practices along with a consistent focus on early childhood nature learning and decolonization. She has sought to support and include in her research, many voices from multiple perspectives.

Janet is a dynamic educator who invites her students into the process of putting theory into practice. Whether meeting her class at the Northeast swale for an afternoon of place-based education or meeting with teachers in rural Brazil to discuss and learn about Place-based Education there, Janet is not one to be confined by institutional norms. We have observed the way her course syllabus is ever evolving as she learns more each year about what it means to be an anti-racist and land-based educator. In this way Janet shows us all that we have anti-racism and reconciliation work to do regardless of the stages of our lives and career.

Janet is a community connector - a low-key LinkedIn service for the environmental education community. She has a knack for putting people in touch with communities and projects that will help them grow and utilize their talents for the benefit of the community. We suspect the majority of people in Janet’s network can attribute their ability to learn about and participate in an initiative or learning opportunity thanks to her outreach and network weaving efforts.

Janet has consistently given back to the Saskatchewan community and beyond by creating positive environmental and social change. She has a long history of volunteering and sharing knowledge, skills and energy to many environmental organizations in Saskatchewan. Whether sitting on a board, writing proposals, or digging up invasive species she has been a collaborative force helping to mobilize local and international initiatives and affect institutional change.
She has been influential and supportive in the conception, development and successful role of many environmental programs and organizations. Her involvement has included but is not limited to:
Creator and Coordinator of the Prairie Habitat Garden – College of Education, University of Saskatchewan
Co-creation of the College of Education Pedagogies of Place course which has ensured that all undergraduate students would receive place-based education
Formation of Environmental and Science Education program in rural and Southern Brazil.
Editing and contributing to the book Decolonizing Environmental Education in Transcultural Global Contexts.
Member of the Swale Watchers that influenced city development to protect the Saskatoon North East Swale.
Founding member and committee member - Wild About Saskatoon and the Nature City Festival
Meewasin Valley Association – advisor
Native Plant Society – member
One School One Farm Shelter Belt Project, Board member (Secretary)
Contributor to the SaskOutdoors organizational development
Contributor to SaskOutdoors Land of Living Skies Journal
Janet has also provided knowledge, ideas and inspirational support for both of us in our design of the Ecoquest Outdoor School program and Wildernook Fresh Air Learning. Her involvement and leadership in supporting Scott as a conceptual advisor, committee member, trip leader and researcher supported the proposal and launch of the grade 8 Ecoquest program in 2003 and its enduring success.

Janet also acted as a mentor and sounding board in the development of local business Wildernook Fresh Air Learning. Prior to launching Wildernook, Janet and Claire participated in an environmental leadership retreat together, where they thought critically about and mapped out gaps in Environmental Education within the province. This collaborative learning opportunity was foundational to the development of Wildernook.

A great deal of the connectivity of the Saskatoon environmental education community, the conversations we are having, and the types of place based-learning taking place in formal, non-formal and informal contexts have been shaped and supported by Janet’s contributions as a researcher, educator, supervisor, board member, volunteer and engaged community member. We hope that this nomination has provided brief highlights of the vast scope and scale of Dr. Janet McVittie’s achievements and contributions, we feel that she is highly deserving of this award.